My baby is almost 20. I can’t believe how time flies. As I type, Hailey is sitting across the kitchen table from me writing down Bible verses in her effort to copy the entire New Testament by hand. (She’s 4 chapters away from Finishing!)

I sat down at the table when she asked me a question about people being saved after the rapture of the church. I discussed (passionately) Dr Fructenbaum’s lecture on the 3 groups of historical people (Israel, Gentiles, and the  Church). This led to the reason for the flood (getting rid of the Nephilim and other monstrosities), Atlantis, Bigfoot, Aliens/Spirits of Nephilim, Panspermia, the Books of Enoch & Jasher,  Evolutionists versus Catastrophists, The Restrainer and what He may be restraining, and many other things. It was a fantastic conversation- for me.

As I stated, I discussed this passionately. I told her I don’t want her to believe it because I have said it, she needs to look into it and learn it for herself, after all, if you believe in the Bible, you believe in many supernatural occurrences!  To which she replied that it makes sense and she does believe it. I also told her that we need to be like the sons of Issachar: “And the children of Issachar, who were men who had understanding of the times, to know what Israel ought to do….” (1 Chronicles 12:32). We should understand the times we live in so we know what to do….

What if The Restrainer allows some “unbelievable” things to happen before the rapture? For example “Men’s hearts failing them for fear, and for looking after those things which are coming on the earth: for the powers of heaven shall be shaken.” (Luke 21:26). Really? Something will come upon the earth? Something not of this earth will come upon it? Really?

If we do not know what times we are living in, and don’t know what we believe about these times, before the next level of craziness is reached, we will not stand. We could be like the majority of Christians nowadays: So self-consumed with getting through the day and our own problems that they don’t have time to understand the times like Jesus said we should (see Matthew 16:2-4), so when something crazy does happen, they will be blindsided and will have to think about how it fits into their worldview, or how to change their worldview.

The non-believer’s answer to them at that time: “You are just using a crutch to make yourself feel better. You are trying to explain away by your faith what I can see with my eyes.” I’m with them.

BUT— If you know what is happening (think Israel, UFOs, CERN…) and people know what you think about these things a priori , before it happens, then they might listen. I know this veers from my other posts, but these are important subjects to me. My links page can get you to a lot of this information- look it up on your own. As far as Hailey goes, she is a smart woman. She knows what is true and can hear the voice of her Shepherd. She’s just not as passionate about eschatology as I am.

In fact, she told me right after we talked that she knows why we don’t talk like this more often! That was a good laugh. Also, she can see why she naturally clicks with her dad better than she does with me!

I’m pretty impressed. She’s right on! But just because we don’t click as naturally as her and her dad doesn’t mean we don’t totally love and respect each other’s interests, viewpoints, and priorities. What a great thing to live in such a diverse home. All that matters is that we agree on the main point in life: Believe on the Lord Jesus Christ and you will be saved. Can you imagine if we all had the same likes and dislikes? What a boring world this would be!

Thanks for listening to your mom passionately rattle on about her interests!

I love you, HeHe! 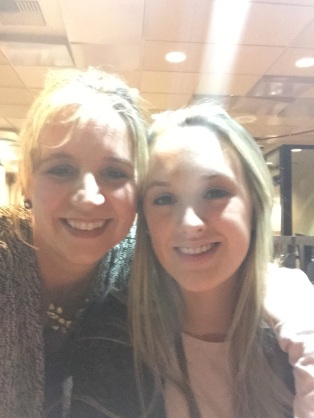 P.S. Just to be clear: Clara toward Dad, Cory toward me. Madeline toward me unless she’s in the hospital, then she’s all about her dad! And if you look at the gender ratios there, it all makes sense.