So last time I mentioned that Eva likes to yell at airplanes flying above to come and get her. It’s only gotten worse. Yesterday it was a helicopter and she screamed at the top of her lungs, “Come and get me!” Just kinda wondering what she needs rescued from….

She loves the hymn Jesus Paid it All sung by Kings Kaleidoscope. At the end of the song they repeat over and over: “O Praise the One who paid my debt, and raised this life up from the dead.” That’s her favorite part. I couldn’t figure out why she calls it the “Take care of my Dad” song- until I heard her singing: “Oh Praise the One who pays my Dad…”

She just turned three. This morning I asked her how old she is. She answered,”7.” I started tickling her to get the right answer. “49!” So really she’s just a math genius, whose next answer would probably have been 2401. (And MAYBE I used a calculator to multiply 49×49…MAYBE.)

Israel is getting so big. No, really… SO BIG. He only nurses at night- little stinker- so if he does want to eat, which I recognize by his restlessness, I gladly feed him. The other night, every time he wanted to eat, he growled like a bear. EVERY TIME- which happened to be many more times than usual. And not like a cute little bear cub. LIKE A FULL GROWN GRIZZLY FIGHTING FOR A DEER CARCASS! Lovely. That’s what I’ve been reduced to, a carcass for food that he growls over. So male.

Madeline was watching the Wiggles the other day. Captain Feathersword was singing with some pirates and she asked me, “WhaDah?”I told her, “It’s a pirate. Say Pirate.” She said “Papawanna.” I laughed and said, “Papawanna?! Goosey, you’re so funny!” She said, in typical 14 year old fashion, “Maaawwwmmmm!” It was so cute.

Wanting some Corn on the Cob for dinner, and Clara being in charge of side dishes, I told her to go get the corn cooking. Her reply? “Aw shucks.” Yes that really happened.

She was telling me some Batman jokes the other day. Funny in a twisted sort of way. But that also describes her, so here they are:

What did one orphan say to the other orphan?

Robin, get in the Batmobile!

Riddler was talking to Batman and said: What do you call something with several holes in it in an alley?

Everyone has been asking me how Hailey & Mike’s honeymoon went. Which is so sweet that they are interested, but really… what do you want me to say? “They had a great time! I mean they REALLY enjoyed it.” Or, “It rained a lot (true), so they stayed indoors…and still had a REALLY good time” ? Just wondering. Um…”They enjoyed walking around Whitefish.” Yes. I know that to be true. She told me the God is so good and faithful, and I then I asked her to stop, that I have no need for any further details. You’re welcome, Mike.

Hailey has been addicted to Famous Dave’s pickle chips, which started on her honeymoon when she took Mike to Famous Dave’s (his type of restaurant). She texted me the other day and said they taste great on a PB & J sandwich. I texted back: “Gross. Take a pregnancy test.” Her reply: “NO!NO!NO!” So besides the fact that she’s NOT pregnant, I’m pretty sure it’s not on their to-do list any time soon.

Adrian left for Texas early Monday after the wedding. He is finishing up Diving and is starting EMT (Emergency Medical Technician) training in a week or so. The boys really loved having him back even though it was only for a few days. They got some of their wrestling out of them. Shauna also loved having him back, but hopefully not for the same reason.

We had our annual day at my cousin’s place on Priest lake recently. Rockie & Dave are always so enjoyable to be around. Lunch time came and they were making sandwiches when Cory said- “That’s not Dave’s bread.” (OMG- Really?!) Due to HORROR, the rest is a little jumbled in my mind, but I picture it happening like this: I said “Yes, it is,” and Rockie said, “This is Dave,” and Dave continued, “And this is my bread.” Problem solved.

Just after that visit, we had our first Ray family reunion. It was so great to see everyone. It was held at my Uncle Mark’s mansion with an indoor pool with several glass sliding doors that opened to the outside where there were multiple inflatable bouncy castles and slides, snow cones, and all kinds of fun. So when I told Clara to grab a floatie for Eva to swim with (we have 7 or 8 around here), she grabbed a pink one that has white duct tape around the back of one of the arms. Yup, every family has a little trash. 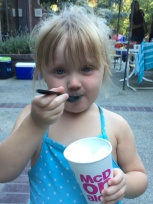 Eva without the Duct Tape Floatie on, eating a snow cone out of a McDonald’s cup- what else!

All the Corys at the Reunion: My Dad, Son, Brother, his son, and Rockie’s daughter.

A few days after that, Rockie and family were headed to a “Breakfast” for her engaged son, Nick, and his fiancee, Claire (and her family who came to town). This is what they saw when they arrived:

I told Hailey she really dropped the ball on this one. What an ingenious idea.

A few days after that…our neighbor graciously invited us to swim at her house. When finding out we were going swimming, Eva said excitedly, “At Uncle Mark’s house!”  I’m pretty sure she’s ruined for life.

While at the family reunion, I told Clara to walk around and take some pics. I meant pics of ALL THE PEOPLE I RARELY EVER GET TO SEE! This is the one pic I got with someone in it: 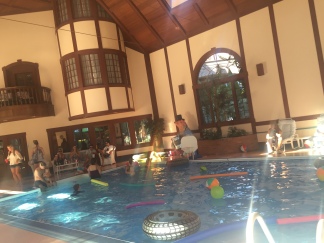 So Presley insisted that Eva sleep with her the other night. We gladly accepted her offer. Even though she’s in a toddler bed in our room, by morning she’s usually snuggling with her dad. When Presley brought her up in the morning, she looked haggard. She said, “Well I hope at least YOU got some sleep.” How many moms have said that before? She gets it. 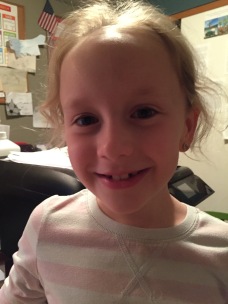 (I took these pics about a year ago. One right before bed when I told her I liked her ringlets. The other, when she woke up in the morning- those ringlets had…transformed. )

I took J’onn to the Eye Dr. the other day to get his glasses fixed. He was wearing his spares (perfect condition) and the band on the ends wouldn’t come off for the assistant to size them. I said, “Here, I’ll take the band off the back…woah, that’s on tight…” And then we hear a “SNAP!” Yup, I broke the back-ups. Thankfully the ones that were broken when we first arrived were just missing a screw so they fixed those and ordered a new pair. Nice job, mom.

As a side note: Signs of the Times anyone? I highly suggest watching Amir Tsarfati speaking at JD’s church. Click Here to Watch

Until next time, enjoy the rest of your summer!